I had the idea for these back in October, which is the only reason I managed to finish them by Christmas. 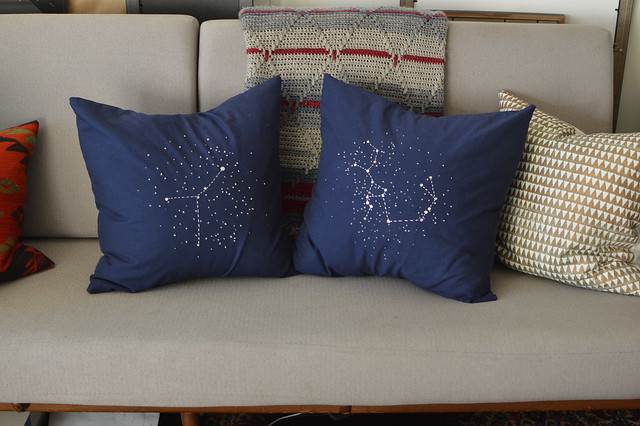 {constellation pillows}
I had marked this embroidered table runner tutorial a while ago and thought it would be perfect for my stepmom, who loves the stars. I ended up doing pillows instead, because they seemed more useful for everyday.

I mostly followed the tutorial instructions, which didn't require much embroidery skill once I retaught myself to tie a french knot. I picked up a remnant of navy blue cotton (these would be beyond good in a dark blue linen, but I didn't have time to search it out), a couple skeins of silvery grey embroidery floss and two 20x20" pillow inserts from Ikea (do not get their poly fill pillow inserts because they are terribly depressing - the down inserts are great and inexpensive). I used silver sequins for the stars in the actual constellation and scattered in a few silver beads as well.

I didn't use the actual template from the tutorial because I specifically wanted Sagittarius and Cancer only. I wasn't expecting it to be so difficult to find a definitive image of the constellations! They vary a lot. I ended up using images from this site because it seemed a little more authoritative than the others and the images were nice and clear. To make it easy to print, I opened each image in Illustrator, locked the layer and then added dots wherever the stars were and lines as indicated. Then I deleted the image, which left me with just the black dots and lines. I traced it on the fabric as indicated in the tutorial (using chalk sheets, which I'd never used before - they're handy!).

After I finished embroidering the pillow fronts I made simple envelope pillow cases using this tutorial. I have a zipper foot packed up in my stuff but this was easier than trying to find it. I should probably have added a little button on the back but I didn't.

Sorry - no close ups! I was taking these pictures super last minute before stuffing the pillows in a giant gift bag.

I'm happy with how they turned out and it was a fairly simple project. And now I want to get much, much better at embroidery. I'm thinking needlepoint portraits for next year? I better get started now.
Posted by Rachel at 7:22 AM