It actually wasn't all that time consuming except for the fact that I ripped it out and redid it. And then I redid the basket weave at the bottom about 10 times because I was short on cord and desperately trying to make it work. 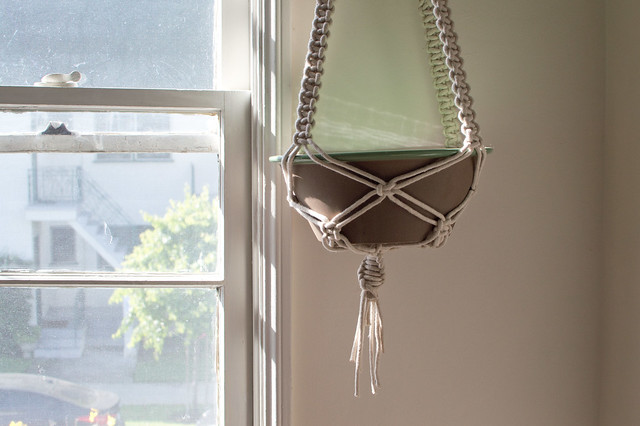 {knots}
I just have a few finishing touches and then we'll get planting. 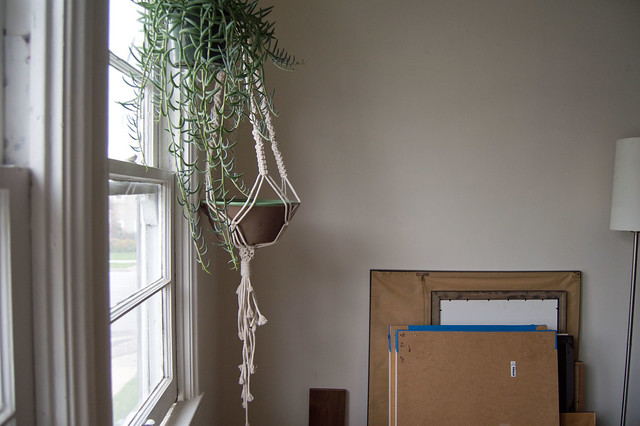 {experiments}
Which is it's own story, really.

I have an aversion to house plants. There, I said it. They remind me of everyone's houses in the '80s and I feel like people with houseplants are always worrying about strange sounding diseases and dusting them. Dusting living things! It just seems so strange, and like more upkeep than I can sign on for. I valiantly attempted to keep my balcony herb garden alive at our previous place because it was functional and I dislike paying for herbs. I gave in when D brought home mounds of rescued jade plant and spent a weekend potting it all up, because he swore I wouldn't have to do anything with it. I liked our green space although I generally let everything die during the winter.

And then we moved to an apartment with not a single scrap of outdoor space. We tossed the herbs and rehomed the jade and within a month Dustin started trying to get me to agree to indoor plants. I reluctantly agreed and then I decided that if a corner of our apartment was going to look like my childhood I might as well go the whole way and learn to macrame. Logical, right?

To be honest, the decision may have had less to do with aesthetics and more to do with the fact that I haven't picked up a new craft in a long time and I miss the feeling of it. It felt good. More details once I actually get it planted and hung.
Posted by Rachel at 7:05 AM