Greyhounds, with a tiny twist

A greyhound is my safe drink. You have a safe drink, right? For when you go to a bar where you're expected to order a drink without a menu and there are no artisanal cocktails (the horror!). Airport bars, for instance. Every bar in my hometown for another. My mind goes blank and I start feeling hopelessly dorky immediately. I think a gin and tonic is usually the cooler option, but I'm still not entirely on board with tonic water. A greyhound is vodka and grapefruit juice and it is nearly impossible to screw up. Of course, there's a wide range of deliciousness, with canned sweetened grapefruit juice on one end and squeezed-at-the-bar on the other (The Layover in Oakland does this and it is amazing). 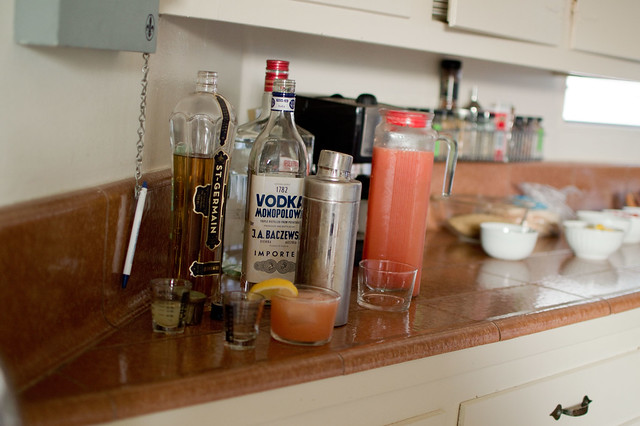 {cocktail hour}
Someone will undoubtedly complain that you cannot call this a greyhound but I'm too lazy to make up another name for it right now. Chow calls it a bichon frisé but let's be honest, I'm never going to say that. Too fussy. 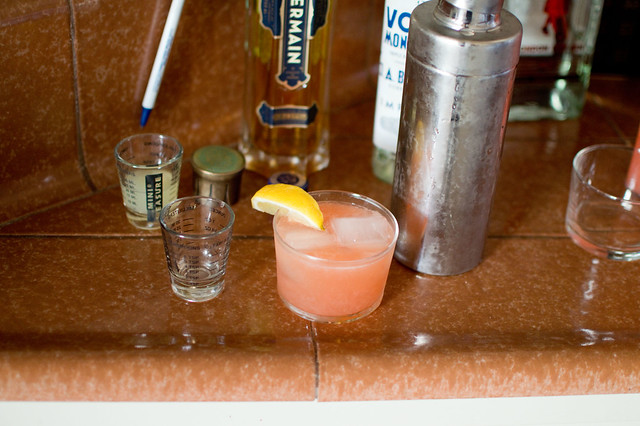 {grapefruit cocktail}
It's essentially a greyhound, but with a tiny bit of lemon juice and a splash of St. Germain. You can swap in gin and you can leave out the lemon but it adds a nice brightness. The St. Germain, even in a tiny dose, does wonders at mellowing out cheap vodka. And, if you are in the market for budget friendly vodka, I'm actually a fan of that Vodka Monopolowa from Trader Joe's. I bought it the first time for the label, obviously, but it's decent in mixed drinks and it's potato based so safe for gluten free friends. I'm not a big vodka drinker in general but I keep it around for some summer cocktails.

:: Pour the alcohol and the juice in a shaker over ice. Squeeze the lemon wedge in and then toss the wedge in as well. Shake well. Strain and serve, with an additional lemon wedge if desired.

The original recipe has less vodka and more St. Germain. I love St. Germain but it's very sweet and floral and expensive, so I vastly prefer it in smaller amounts. Sometimes I'll even cut it down a touch more, using 1/2 ounce for two drinks. This will also be heavily impacted by what type of juice you're using. The recipe is written for unsweetened ruby red grapefruit juice. If you're using sweetened juice, you might want even less St. Germain. If you're using freshly squeezed white grapefruit juice, which is more tart, you might want a bit more.

PITCHER VARIATION: If you're making pitcher greyhounds, which I did for the fourth of July this year, you can go even lighter. Combine nearly equal parts vodka and grapefruit juice and then add in just a bit of St. Germain. We're talking maybe 3 cups grapefruit juice, 2 cups vodka (taste and adjust to your preference at this point) and just mix in 2 or 3 ounces of St. Germain at the end. The effect will be so subtle that you might not pick up on it if you didn't know it was there, but if you tasted the drink before and after, you'll notice how much more nuanced it is. I didn't bother with lemon juice in these, although I'm sure it would have been good. You'd probably only want 1 ounce.