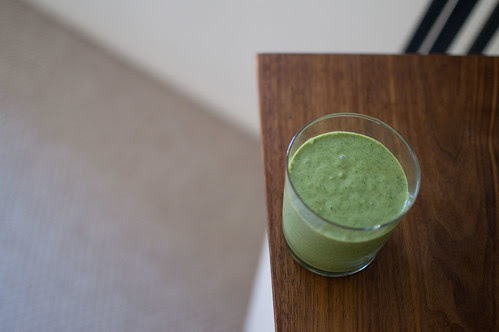 This is tasty and all, but so far nothing miraculous has happened, which is kind of what I was led to expect based on the internet ravings. Shouldn't my skin be glowing by now? 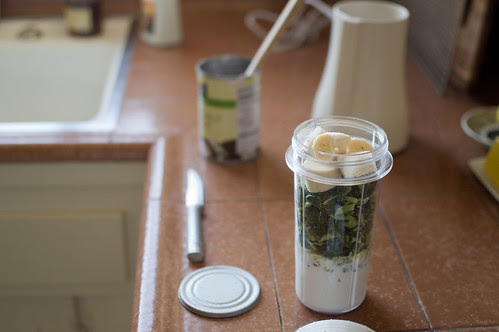 Currently blending:
About 1/3 - 1/2 cup full fat coconut milk (not the kind in the carton!)
A generous splash of orange juice or, in a pinch, cranberry juice
1/2 small banana
As much frozen kale or spinach as I can fit in my little blender (probably 1.25 cups)

It is surprisingly filling, which I think is down to the fat in the coconut milk. I started out with less green and a whole banana, but if I'm making one for D and one for myself then I just give us each half a banana and it's still sweet enough for me. And then I ran out of bananas completely and I can now report that it's fine without, but better with. I usually thin the smoothie with a bit of orange juice but I've used cranberry juice and if you are juice averse you could use coconut water or something similar. The frozen greens are the kind in the bag from Whole Foods, not the box of chopped frozen spinach. It probably works with the boxed kind but I haven't tried it. Also, the Whole Foods generic coconut milk is the cheapest I've found anywhere. No, they do not pay me but they are the only grocery store that I can easily walk to and that's why I mention them all the time. They have a reputation for being really pricey but their generic stuff is on par with TJ's.

This experiment started pre-Thanksgiving, but it's very appropriate after a week of leftovers overload. I have holiday food portion control issues and then I get in a bad cycle where I eat too much dinner and then don't feel hungry enough for breakfast and then it repeats, over and over. I've found that on days when I can't face my usual breakfast of eggs the smoothie is the best solution and it can nip that cycle in the bud without triggering the sugar cravings I get from most commercially made smoothies.

Whew. I guess I get why people talk about them so much. Apparently once you start discussing green smoothies you can't figure out how to stop. I'm not even that obsessed, I swear.
Posted by Rachel at 5:51 AM