The makings of a quadruple Barbie cake. Because we are all about fulfilling long delayed childhood dreams for those we love. Also, we like a baking challenge. 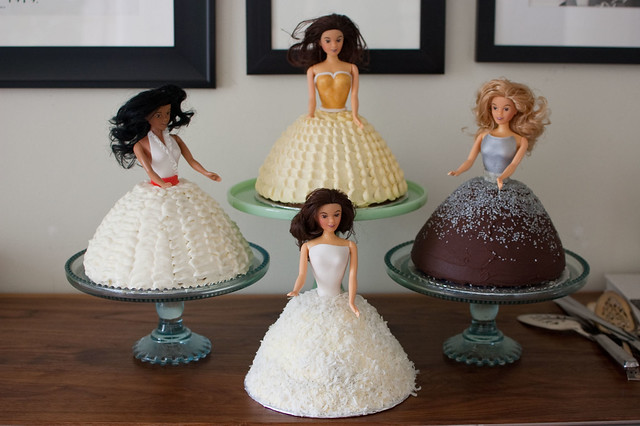 {quadruple barbie cake}
We bought a Wonder Mold, three extra doll cake picks, one small package of white fondant. Optional: decor of your choice - we picked out silver food spray (because how could I resist?) and some sparkles and I already had some gel food coloring. This is all cheaper if you strategically use Michael's coupons but in hindsight I'd probably just order everything online because three trips to Michael's (my personal hell) in one week nearly unhinged me.

I picked out our recipes. This would have been much faster if we used cake mix. Normally, I have nothing against cake mix in a time crunch and if you make your own frosting most people will never know. The Barbie cake dilemma is that the ratio of cake to frosting is way off. You have a big slab of cake with just a small outside layer of frosting, so I was concerned that the cake mix taste would be too prominent.

D and I brainstormed decorating ideas and came up with some sketches. We spent waaaay more time talking about these cakes than any sane couple ever would. We're firmly united in our love of ridiculous projects.

It worked out pretty well, but you probably won't be surprised to hear that we were up until 2 am on Thursday night. If I'd been able to take a half day off of work it wouldn't have been an issue, but I wasn't about to tell my boss I needed time off to make an enormous Barbie cake.

Here are the ladies and the recipes I used for each of them. 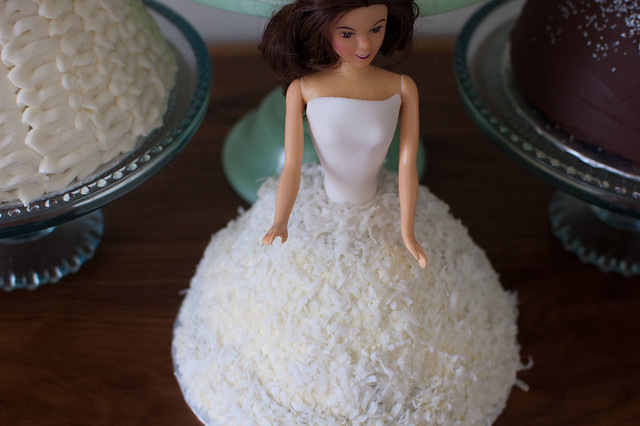 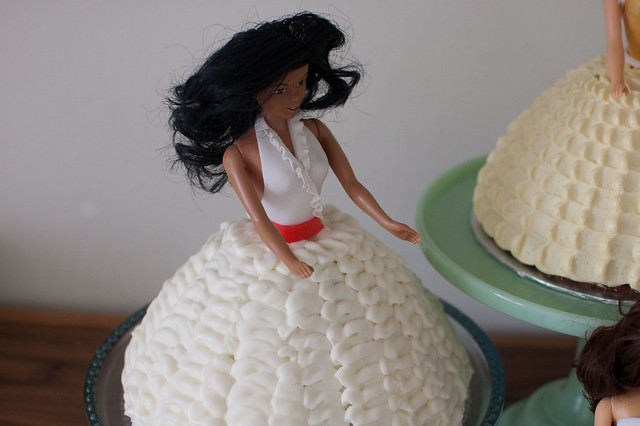 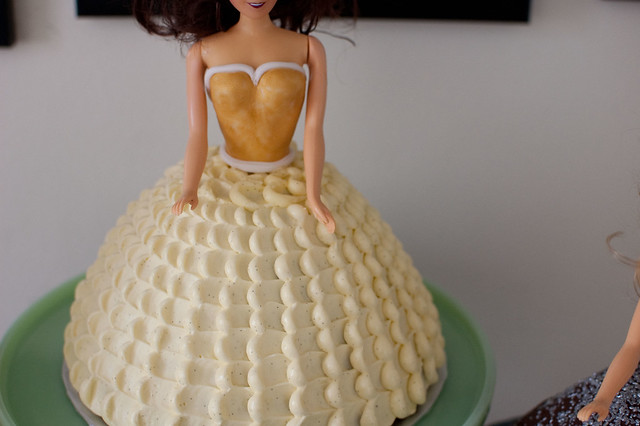 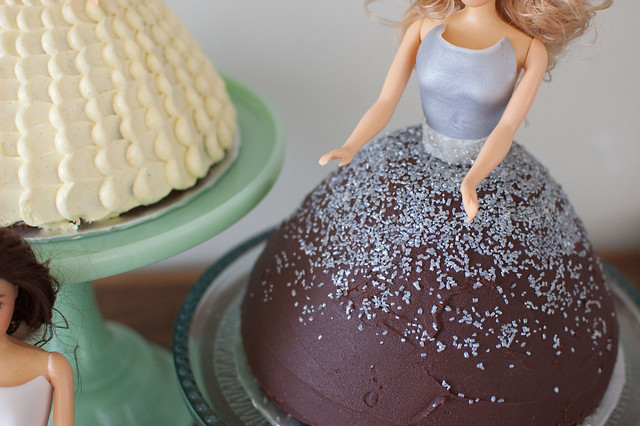 Everything was a single batch except the chocolate frosting which was doubled. The cake mold holds 5 - 6 cups of batter, which meant some of these cakes had more batter than I could use. I filled the mold 3/4 full each time and if there was leftover batter then I poured it into little ramekins and baked them for snacking. Cake fuel!

We've made the coconut lime cake from Smitten Kitchen before so we knew it would be good. I think next time I might want to try subbing in some coconut milk for the buttermilk. I love coconut, so I can't get enough. I did a crumb coat with some of the french buttercream I made for the lemon rosemary semolina cake, then drizzled the lime glaze over it and then just packed coconut flakes on top.

I'm not a huge red velvet fan but it's always a crowd pleaser so I searched for a recipe online. The one I used was very moist but had enough food coloring that I could taste it in the finished product and it squicked me out. I'd probably make it again but I'd cut down on the food coloring by 3/4 and see if it was still red enough to give the effect. The cream cheese frosting that goes with the recipe (scroll down to see it) is good and all I did was add a little splash of lemon juice for extra tartness and slightly less powdered sugar. It made the frosting a bit soft, but I'll take taste over structural integrity any day. I was going for this ribbon effect but I didn't have anything even closely resembling the right tip, so it turned out a little wonky. It didn't help that it was 100 degrees out and I kept having to stop and stick everything in the fridge to cool down.

The lemon rosemary semolina cake was very, very good and will get added to my binder. It isn't very sweet and is slightly reminiscent of cornbread. The rosemary is just a hint of flavor, I might even up it next time. This cake doesn't need frosting at all, but if you have to frost it then Brave Tart's faux French buttercream is a good option. The frosting is rich but not very sweet. If you aren't a fan of butter, you won't like it, but it paired really well with the simple cake. I generally make this Swiss buttercream, which uses egg whites. The French buttercream uses egg yolks and the taste ends up being almost like ice cream. Like Swiss buttercream, it must be eaten at room temperature. If it's even the slightest bit cold, all you taste is butter.

The double chocolate cake remains the only chocolate cake I'll happily devour with or without frosting. I used the emergency chocolate frosting recipe and they paired perfectly. It was the simplest one to decorate because I just used an offset spatula to slather the frosting on and then added sprinkles.

And here is a rather grainy cell phone picture of the ladies in action that night. We bought sparkler candles, placed one on each cake and crossed our fingers that we wouldn't end up with any flaming Barbies. 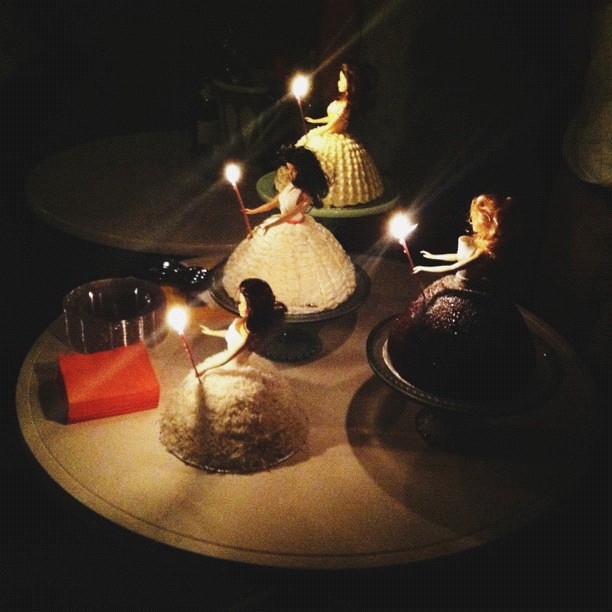 Adventures in fondant coming tomorrow ...
Posted by Rachel at 5:49 AM