We've been having some issues with weight gain over here and I wasn't really prepared for the emotions that go along with that. Adrian was in the 80th percentile for weight at birth, but dropped to the 60th at her one month check and then down to the 30th at her two month (she's been steadily 95th for both height and head since birth). After we got the news at her two month appointment our ped suggested that if she was still falling lower on the chart in another month we would want to discuss formula supplementation. While I'm open to doing whatever we need to do to make sure she's getting what she needs, I immediately started feeling guilty and stressed about her eating. The thing about breastfeeding is that it's a total black box. All I could do was time how long she was eating but that doesn't really tell me how much she's eating. When we'd visited our lactation consultant back in the very beginning she would weigh Adrian before and after eating so we could calculate how much milk she got. It was so cool that when we were at the baby store and saw the Hatch Baby Grow we definitely considered purchasing it, but we convinced ourselves that it was ridiculous and over the top and obsessive.

Hi there, week one us! This is two month us, and we are ridiculous and over the top and obsessive and we have zero regrets. Nice to meet you.

So yeah, we purchased a changing pad that is also a baby scale, so that we can weigh our kid obsessively and know how much she eats at each feeding. And I love it. We've only been using it for two and a half weeks (I will update this review if we have any issues down the line) but it's been amazing. And as it turns out I love the app that goes with it so much more than the previous one we were using (and you can use the app even if you aren't using the scale, so I'll give a little detail on it below in case you're just interested in that).

FYI - this is 100% not sponsored, I purchased it myself and the company has no idea I exist. 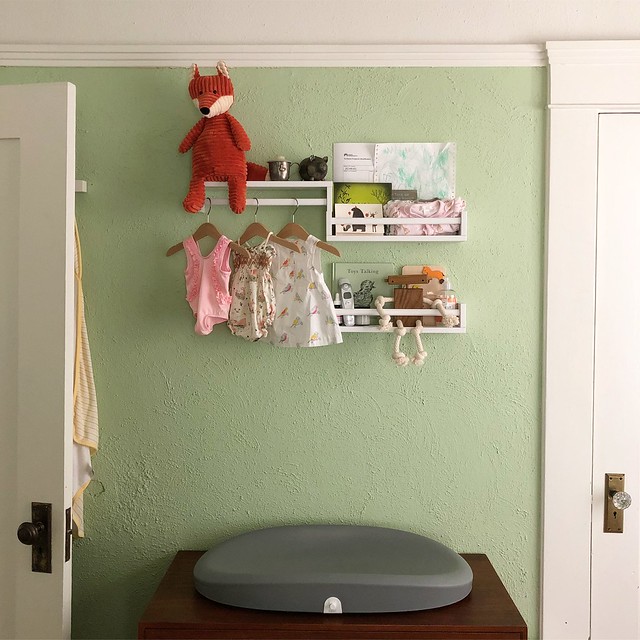 Thoughts about the Hatch Baby Grow -

They made an attempt to make it look modern, but honestly, I liked our regular old changing pad better because I could put cute covers on it and it was brighter. I feel like the grey is a little dark in our space. I can understand why they didn't go with white, but I kind of wish it was white or a super light grey.

The material is a soft-ish plastic foam. It isn't hard or slick but it definitely isn't cushy at all. Again, I prefer our conventional changing pad because with this one I have to be super careful to set her down gently or I risk bonking her head (which wouldn't injure her, this isn't a brick surface, but it does startle her). On the other hand, you can just wipe this surface clean with a wipe, which is kind of amazing.

The functionality of the scale outweighs these cons, though. I love the scale. There's no digital display, so you have to connect it to your phone via Bluetooth and use the Hatch Baby app. But it's super easy to use and I've only had issues connecting with it once. Basically, you open up the scale in the app, lie your baby down, and then tell the app if you want to record a weight or do a feeding. If you record a weight, it just saves the info for you. If you are starting a feeding, it takes a pre-feeding weight and then you come back after the feeding and weigh the baby again and it will automatically calculate the feeding amount and then save it for you. Being able to track her feeding amounts has given me so much peace of mind. I can see that she's a pretty consistent eater, taking in pretty much the same volume every day, and I can also see that all my efforts to get her to eat more often aren't really making a difference. I realize that sounds discouraging, but it's actually great info to have! Adrian naturally seems to want to wait and only eat every 3 - 4 hours during the day, sometimes even stretching it out to 5 hours if she's having an epic nap. If I go by her schedule and let her do that, she'll eat 3 - 5 oz per feed. If I try to encourage her to eat more and wake her up every two hours to feed her, she eats 1 - 2 oz per feed, and my daily total comes out the same, even if her total eating time is much higher. She also doesn't sleep any longer at night. Knowing this makes me feel so much more comfortable about letting her set her own schedule. (Standard disclaimer here - every baby is different, this is definitely not medical advice, and I'm consulting both my LC and my pediatrician as I figure out what works for us - we might still need to supplement with formula).

Technical stuff - it's accurate to 0.25 oz, which is good enough for our purposes, and it seems to be pretty consistent with our doctor's scale. Baby weight obviously fluctuates day to day, based on how many fluids they have on board, etc. I do daily weigh ins for her but don't stress about her being up and down on the day to day. If day to day fluctuations are going to stress you out, then weighing once per week is probably better. The weights you get for feedings throughout the day aren't meant to be weight checks, because you don't bother to undress or undiaper them for those. Just keep them consistent by not doing outfit or diaper changes. I weigh her in whatever she's in (with paci, if she's using it), feed her, and then immediately weigh her again before changing her diaper or anything. That gets you the most accurate weight.

Adrian is super wiggly and this scale still works well. If she's moving like crazy it won't get a reading, but I've found the leaning over her and talking to her gets her to smile and hold still long enough for the scale to capture the weight.

Max weight is 44 lbs, at which point I'm pretty sure Adrian will be way too big for this scale anyways.

The app calculates the weight percentile automatically. They use the WHO growth charts, FYI, which may or may not be what your doctor uses. 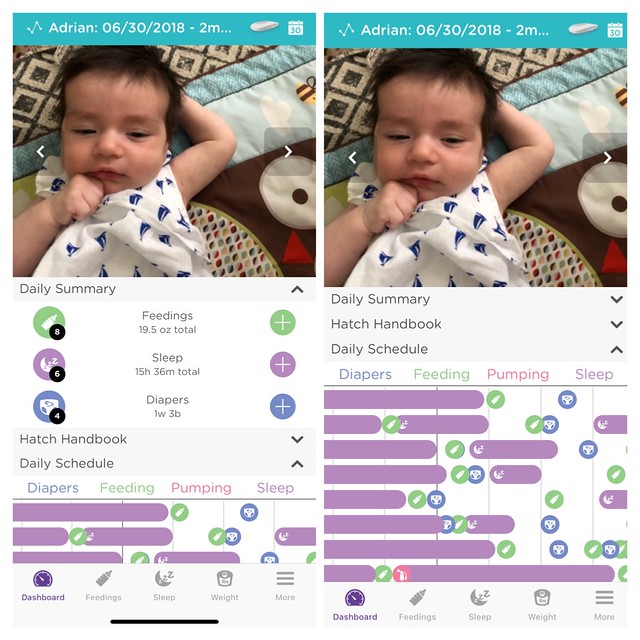 Even without the scale, I think I would still love this app. We aren't at the point where we're making any attempt to put Adrian on a schedule, other than trying to set bedtime for approximately 8pm, and trying not to let her stay awake much longer than 1.5 - 2 hours at a time during the day. But my favorite thing about the app is that it gives you a chart that lets you line up the last several days and see the eating and sleeping patterns. This has been awesome for me, because I can kind of see how she's developing her own schedule and it gives me an idea of when to expect her to be awake or asleep or hungry. The visual just helps my sleep deprived brain so much.

Other things I love about the app (we were previously using Baby Manager, for reference):
You can easily navigate through it even while you have a feeding running. With our other app, if you were in a feeding you couldn't do anything else until the feeding was finished. This sucks because I like to be able to enter diaper changes, check sleep times, etc, while I'm sitting there feeding.

The feeding interface is nice because it times the overall feeding and also the time spent on each breast. You can just tap to switch sides, and the app will save which side was last and show you that info when you go to start a new feeding. My previous app showed each side as a separate feeding, which made it really complicated to add up how many feedings she'd had that day, since she sometimes eats from both sides but sometimes only eats from one.

Cute little detail - you're prompted to upload a photo for each day and it's just way cuter to scroll through your data this way.

Things I don't love - no place to enter head circumference, which we had previously been tracking as well. Sometimes the app is a little glitchy about letting me delete entries and they reappear (this only seems to happen with the auto entries from the scale, so it might be an issue specific to that). I also wish the visual distinguished between wet and dirty diapers. You can see that info if you are looking at the list of diapers, but it would be nice to see it in the daily summary visual. At some point we'll stop tracking wet diapers and then it will be more clear, but since we're still worried about her weight gain I'm trying to make sure we're tracking everything.

Random thing that only a parent would ever request - I wish there was an app that let you attach photos of your diapers to the diaper entries. I realize this is disgusting and before I was a parent I would never have imagined that I'd want to request a visual, timed record of shit. Now, I want a shit slideshow, with dated entries, so that I can figure out what is normal and what is weird and pull it up later without having to scroll through my entire camera roll. I can't be alone here, right?
Posted by Rachel at 12:59 PM