This is not revolutionary but I don't think I've ever discussed it. A couple years ago I made vanilla extract as part of our Christmas gifts for family (and apparently never posted about it) and I haven't purchased any since then. 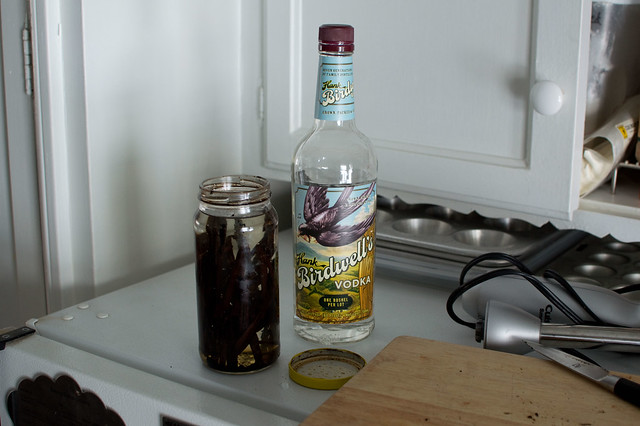 {more vanilla extract*}
I researched all kinds of vanilla beans, got overwhelmed and just ordered these because it was easy and I got free shipping. (see my note below - do NOT order those!) The 8 oz bag has approximately 54 beans and it lasted me for about two years. For the first year or so the beans stayed pretty plump and I loved having them on hand to scrape directly into recipes (pudding is particularly good when you use fresh vanilla bean) and I also started making extract. I have a completely unscientific method that involves splitting a handful of beans and covering them with vodka and then waiting. I don't bother worrying too much about the proportions, but I've seen recipes calling for anywhere from 3 - 10 beans per cup of vodka, if you want a reference. I go heavy, using about ten per cup. Vanilla does contain some compounds that are water soluble, according to my internet research, so I always stick with vodka and make sure it's about 35 - 40% alcohol (70 - 80 proof). This ensures there's enough water to get all the flavor.

You do need to plan to wait at least a month to allow enough steeping time. I decant into a smaller bottle once it looks nice and dark (I bought these for our Christmas gifts that year and kept a couple for our use) and then I'll reup my stock by tossing in a few more beans and vodka. I don't bother taking the old beans out.

When I opened the bag of beans while reorganizing the pantry last week (er, last month) I discovered they'd finally hit their limit and were brittle and dry. Luckily they're still perfectly functional for extract, but I guess it's time to reorder. Edit - I wrote this draft a month ago and did, in fact, re-order. The beans were terrible! It was like a completely different product, even though it was the same seller, exact same item. They were mushy and weird and I was too scared to even open the package so I returned them right away. I'm leaving the original link in just in case anyone was thinking about ordering from that supplier. Don't do it! I've heard good things about Beanilla and might go that route this time even though they're much more expensive.

I'm honestly not sure if this saves a ton of money. It was about $30 for the bag and it lasted from November 2011 to January 2014 and made enough extract for our use and for sharing. I just like knowing I'll never run out of vanilla extract and I like having fresh beans on hand.

*This photo was taken on the top of my refrigerator and no, it wasn't staged there for any particular purpose. Every surface in my kitchen was covered with stuff  because I was reorganizing the pantry but I didn't want to have to put away the nearly empty bag of dried out beans so I just put my cutting board up there and stood on the step stool. I am easily distracted while cleaning.
Posted by Rachel at 6:33 AM