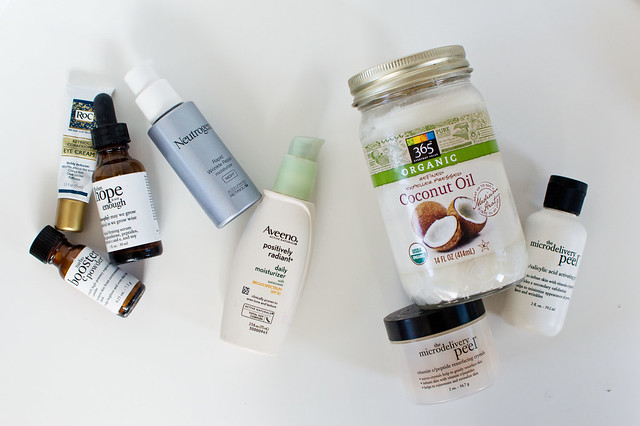 I have skincare confusion. Ever since I turned thirty I've been feeling like I should have a more strategic skincare system. But figuring it out felt like such a barrier that I managed to put it off for over two years. My skin is fine. It's dry but not particularly sensitive and for years I've just been washing it with Philosophy's Purity face wash and then using a lotion with SPF during the day and a thicker lotion at night. I'm definitely noticing more lines and dark spots as I get older and this fall, in a fit of good intentions, I buckled down and read a bunch of articles online and then came up with my own plan. I researched options, loaded up my various online carts* and bit the bullet (wincing at the cost - apparently looking ageless comes at a price, which isn't really surprising).

I stuck with my little routine religiously for two months, but when I started running out of stuff I just switched over to slathering coconut oil on my face twice a day and you know what? Works just as well, as far as I can tell, except that it does a better job moisturizing and a $5 jar will last me an entire year, probably.

I now wash my face nightly with Purity, then put on a generous layer of coconut oil and let it sit while I brush my teeth, etc. I wipe off the excess gently with a washcloth before I go to bed, but only because I have bangs and prefer not to saturate them with oil while I'm sleeping. I don't soap my face in the morning, but I do wipe it down well with cold water, then rub in a thin layer of coconut oil and let it sit before putting on my moisturizer with SPF (still using that Aveeno stuff pictured above although I might go back to Neutrogena Healthy Defense once it's out).

Once a week I use the Microdelivery Peel system from Philosophy (I've actually been in love with this product for years but was never consistent about using it before) and follow it up immediately with a thick layer of coconut oil.

I was afraid initially that straight oil might clog my pores but I haven't had any issues with it and it's been three months now. Of course, your mileage may vary. As I mentioned, my skin isn't sensitive or prone to break outs, but it is extremely dry. Yay for cheap solutions!

I'm still open to suggestions, though, if you have anything you couldn't live without ...

* If you're curious, here's what was on my shopping list, what I ended up purchasing, and how I liked it:

A serum (with vitamin C, which is supposed to help with dark spots) - I picked Philosophy's When Hope is Not Enough serum and then bought their Vitamin C powder that you can mix in. Verdict - I went through the entire bottle of this and didn't notice any difference. Bummer, because I normally love their stuff, obvs.

A daytime lotion with brightening agents (vitamin C or soy) - I got Aveeno Positively Radiant in SPF 30. Verdict - it's fine, although I think I had an adjustment period where this made my face slightly red immediately after application (it would calm down within 20 minutes or so). I don't think this is the most moisturizing option, but when I'm pairing it with the oil it's fine. I haven't noticed the brightening effect, though.

A nighttime lotion with retinol (for fine lines) to use a few times a week - Neutrogena Rapid Wrinkle Repair. Verdict - I used this for a while several years ago and definitely noticed that my skin looked brighter and tighter, so it was a no brainer for me to go back to it. I haven't been great about using it the last few months because it's been so dry that I'm reluctant to risk making my skin any drier. I also don't love the feel or the smell, but as soon as the weather calms down I'm going to suck it up and try again.

An eye cream with retinol (ditto) - RoC Retinol Correxion, based on online reviews. Verdict - I've been inconsistent with this for the same reason as the lotion. It feels fine, though, so I'm more likely to use it nightly.

Weekly facial peel - I've been using Philosophy's Microdelivery peel every once in a while for years and looove it, so I stuck with it and just resolved to do it weekly and not feel guilty about it. Previously I was hoarding it but it's easier to justify the ridiculous expense when my other main facial product is coconut oil.

Not originally on my list, but I got it with my Sephora points at checkout and it turned out to be a lifesaver - Josie Maran's argan oil. Verdict - amazing, but the insane cost per ounce is what pushed me to give the coconut oil a try. I honestly don't find there to be a huge difference between the argan oil and the coconut oil in terms of outcome. The argan oil absorbs more quickly and you use less of it, but they ultimately moisturize equally well for me.