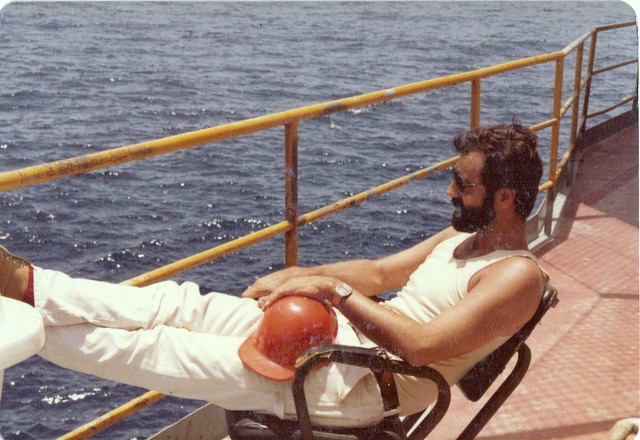 {dad in dubai, circa 1983}
My amazing, indomitable father died on Tuesday, February 24th, after living with cancer for five years. We thought it was just a flare up of the same issues that landed him in the hospital last month, until it got worse, quickly. I drove straight to the hospital from a work meeting on Friday night, crying as I crawled through LA traffic. My sister got permission to fly down and on Saturday our family made the difficult decision to stop all medical interventions. The next four days were physically and emotionally exhausting. Watching my father die was the hardest thing I've ever done. We spent a week planning the memorial service and I existed out of time, wading through memories, wholly focused on honoring him and his life. And now it's over and I feel small and lost. Last week I went back to my normal life and it's just hard to understand how everything keeps moving along as if nothing has happened when there is this huge, gaping hole in the world. I'm trying to figure out how to keep going when just doing the usual things - showering, buying groceries, going to work - leaves me feeling exhausted and worn thin.

I had a post in my drafts that I had been writing for a while, just to help me process everything that was happening. I wasn't sure if I was going to share it or not but I think it's important, to me, maybe to anyone else who is living in this state of uncertainty.

None of this is on the blog. There are lots of reasons that I don't write regularly about some of our family health issues. There's privacy, for one thing. My dad is a private person and these issues aren't mine alone and I'm not comfortable sharing in real time. There's avoidance, on my part. I prefer sharing the good bits here and not constantly re-hashing the disappointments. I try to avoid over thinking in person as well, but I'm not as successful.

So I've been quiet. But now we are at this point, the point where we are forced to admit that we're out of options. We've fought hard and we've tried everything we could. My dad has endured with good grace the endless rounds of appointments and scans, the painful treatments and long recoveries. We've endured living with death in the room for the last five years. It is wearing.

My dad was diagnosed with cirrhosis years ago, when I was in high school. He's an odd case, with no hepatitis, no alcohol use, none of the usual risk factors. They aren't sure why his liver is having so much trouble. Not having a reason is frustrating, which seems odd since the end result is the same.

We have spent five years in this limbo. Once our options ran out, it got harder. I dread every appointment, knowing that we have no chance of good news and a high chance of bad news. I'm relieved when there is no news, when we are on a plateau. We ask for timelines, percentages, chances. The doctors hedge, as we know they will, because predicting the progression of cancer in any given individual isn't just difficult, it's impossible. I know that but I still have to ask. My family is blunt, we do not dance around medical decisions, the doctors appreciate how comfortable we are with these discussions. My dad and stepmom make funeral arrangements, because it is practical. We go over memorial services. We make off color jokes about cremation.

I cry, not at the doctor's office, not in meetings, not in front of my dad. I cry in the shower, during TV commercials, on my bus ride home. I carry tissues everywhere. I finally accept that maybe I should try seeing a therapist and it's the right decision, but I cry even more. Apparently that's a good thing. I learn to stop telling myself that I'm doing a bad job dealing with this and just tell myself that yes, this is a shitty thing to have to deal with. I try to be nicer to myself. I fail a lot.

I am terrified. Liver failure can end particularly badly, not with bedside reminisces, but with an elevation in the ammonia levels in the brain that leave the patient paranoid, angry and often violent. I'm terrified that in his last moments my dad will be convinced that he hates us. I try to prepare myself to erase those moments but I'm not sure I can do it.

We exist in a tug of war, my dad and I. We talk about lots of things but avoid feelings as much as possible. We are trapped. I know that he needs comfort and care but he wants to be the one taking care of me. I want him to take care of me. I am an adult in every way, taking notes, researching medications, calling doctors. Inside I want to stay a child. I want my dad to fix things.

My dad tells me he has a savings account for his dog, to manage her expenses once he's gone. I cry every time I think about it.

There are so many different ways to lose someone. This drawn out loss is a blessing in some ways, the chance to prepare, to say things you want to say, and a curse in others. We are living with no hope* and it gets harder as every day goes by and the chances of bad news mount. I'm not sure I can handle it. I try to balance my time, seeing my dad as often as possible while still seeing my mom and my stepdad, D's parents, our friends. I feel guilty nearly all the time. There isn't enough of me to go around.

I save all my sick time, hoard my vacation days. I feel guilty because we still haven't decided if we will have kids and now it's too late for my dad to ever meet our theoretical children. I feel like I can't have kids because I know he'll never meet them and it seems too unfair.

I think about my dad's eulogy, about what needs to be said. My dad is a towering presence in my life. He's a soft spoken, over-sized cowboy philosopher. A woodworker, an oil rig engineer, a man who loves logic and cares more about animals and children than the majority of adults. I run out of words, because I still don't really believe that this is happening.


---------------------------------------------------------------------------------------------------
My dad didn't become angry at the end, and for that I am eternally grateful. There wasn't even a long decline, other than the uptick in hospitalizations the last few months. He was vital and wholly himself, making plans, listening to me agonize over whether or not to move, talking about our dogs, speculating endlessly about whether my sister was eating enough protein. In those last few days he was aware of our presence until he wasn't, and we were able to stay at his side the whole time, caring for him as best we could. His memorial was beautiful, a testament to his life, filled with family and friends and neighbors and the receptionist from the vet's office. This should all give me comfort, and it does, I promise. It's just that it isn't enough. My dad was the strongest person I've ever known, and I carry some of that strength in me, and I know I can go on. I'm just not sure how right now. *Edited to add - I was re-reading this and realized that I thought we were living with no hope, but hope is a sneaky bastard and gets in there even when you don't realize it. I had hope, this whole time, even when it wasn't justified, even when I thought I'd accepted our situation. I had hope that we could continue on this plateau forever, like we had been the last few years. I had hope even in the end, after we'd taken him off fluids and had been told repeatedly that it was just a matter of hours. There is always that tiny sliver of hope and in some ways it's the most difficult part. Because you can't completely convince yourself there is no hope, even when you think you have, and then you are broken all over again when you lose it. But I can't regret it because it speaks to something beautiful - love, resilience, desire. And I don't want to be someone who decides to live without hope, no matter how misplaced it might be.
Posted by Rachel at 7:22 PM