Back in December I decided to treat myself to a crochet project. I used to love crocheting, but I stopped because I was working pretty intensely in the lab at the time and all of it combined was aggravating my wrists. So it's been years since I crocheted anything, but I was craving it and I told myself I'd be careful.

I started about three different afghans and pulled them apart and finally decided that what I really wanted was a cover for our throw pillows. See, we've had these black and white Ikea cases that we picked up almost a decade ago and I was getting so sick of looking at them.

I mean, they're fine, I guess. I was just tired of them. 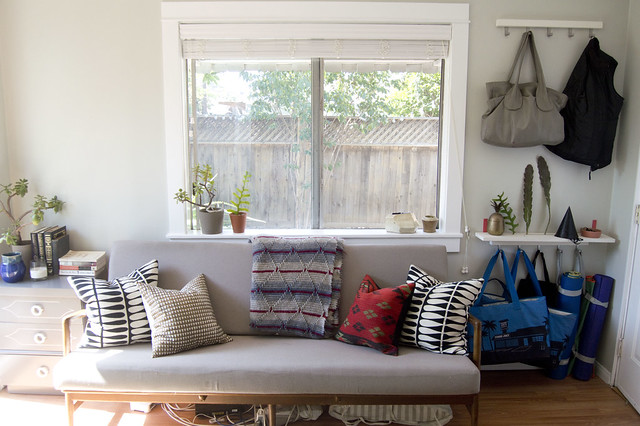 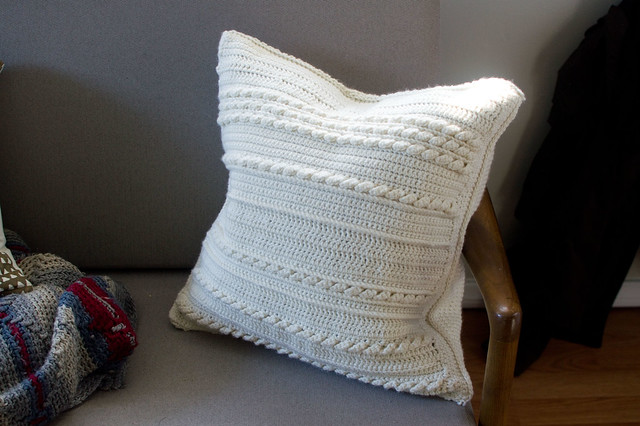 (Except it was less voila and more like being hunkered down on the couch for an entire season of Gilmore Girls while I messed around with different sized hooks and learned some new stitches - deeply satisfying craft time.) 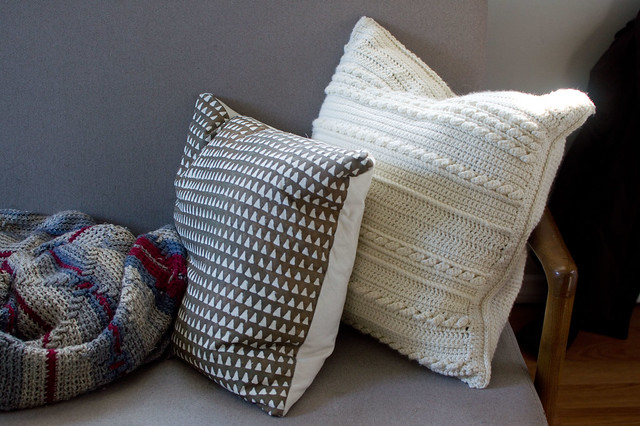 {new pillow}
It plays nicely with our gold and cream West Elm pillow (that I am not yet sick of) and it brightens up the whole couch, although you can't tell from this photo because it's been gloooomy around here and all my photos are coming out blah. I was so happy with how it turned out that I immediately made another one, and then another one, and then cut myself off because I started to worry that this would become my version of the doily and soon our entire house would be slip covered in chunky crochet.

I don't have exact instructions, but here are the details - I wanted something as close to knitting as possible (I should really learn how to knit) because I wanted a lot of texture. I ended up searching for ages to find more information about Aran crochet. The pattern I found most useful is this one. It's for an afghan, but it does a nice job of clearly describing several different stitches that create great texture. I worked through the rows a couple times on a test basis, just doing a short piece instead of the length they call for. Once I felt like I was comfortable with the stitches, I started on the pillowcase. The base is single crochet and then I would throw in rows of pattern randomly. For this pillow I just used the front ridge and cable patterns. I stopped when I had the right size front (about 17" square for my 20" pillow insert). Then I created two back panels out of single crochet so I could do an envelope closure in back. On one of the pieces I skipped a few stitches about 3/4" in from the edge to create buttonholes. At the end I pinned all the pieces together and then pieced them together by running a quick slip stitch along the edges.
Posted by Rachel at 9:13 AM