I was on a roll after making my crocheted pillow cover (and looking for someone I could pawn the second one off on) so I made some throw pillows for my sister, a project that's been on the back burner for over a year now, when she first mentioned that she'd like some. This is the only gift I attempted this year and I'm really happy with them. She has our dad's old leather couch, which he had for as long as I can remember. He never had throw pillows for it (too manly?) but every time I visit her we talk about how it should have some. 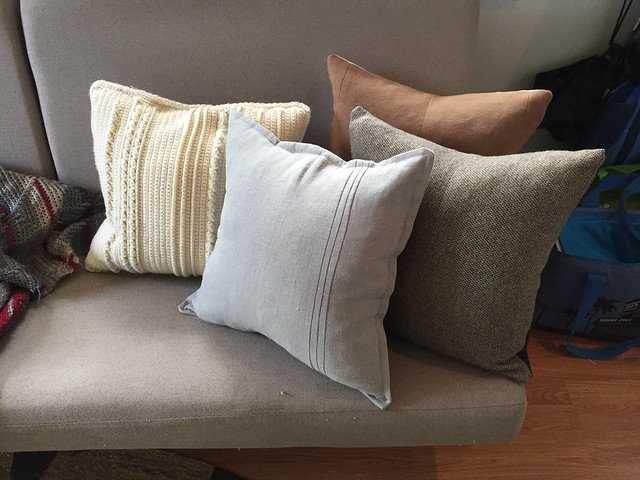 pillows on my couch, not the leather one
That couch has always felt very classic and masculine and I wanted the pillows to be in keeping with it. I decided to go with a clothing theme, if that makes sense. I had the crocheted pillow, which is reminiscent of a sweater. The camel and the houndstooth are cashmere fabrics that I salvaged from thrifted men's coats and they're backed with linen (white for the camel, black for the houndstooth). The grey one is a nice heavy duty linen that I got at Ikea (best source for good cotton/linen solids) and I gave it some pintuck pleats for good measure (and then promptly made myself one because I love how it turned out).

These Ikea pillow inserts are the best. 20" square, down filled, inexpensive. They aren't super plump, so I sew my pillow cases a bit small (17" or 18" square) and kind of stuff them in there. I like an overstuffed pillow because you don't have to fluff it up as often.

Throw pillows are pretty simple but I still manage to spend a lot of time on them, especially when I haven't done them in a while. For these I used an envelope style closure* in the back and then added a couple of buttons on each. Since they're overstuffed the buttons help prevent gaping.

This reminded me that it isn't that hard to do these little projects I keep putting off.  I can be really lazy about pulling out the sewing machine, but the end result is so satisfying. Maybe I'll actually hem those curtains that have been dragging 2" on our floor for the last six months.


* I was looking back for the tutorial I used the last time I made slip covers and was bummed to discover that the page is gone. But this tutorial has a nice explanation and works really well for the 20" inserts.