Taking those last pictures was the straw that broke the camel's back, re: me and our kitchen grout. I had issues with our grout. Namely, the fact that it hadn't been redone since the 1930s and most of it was missing. At some point someone came along and attempted a quick fix by running large amounts of painting caulk along the more obvious gaps. I'm almost positive this didn't improve the situation.

One Sunday I couldn't stand it anymore so I did what any rational person would do - decided on the spur of the moment that I was going to re-grout the kitchen instead of taking care of the laundry, meal planning and grocery shopping that actually needed to get done. 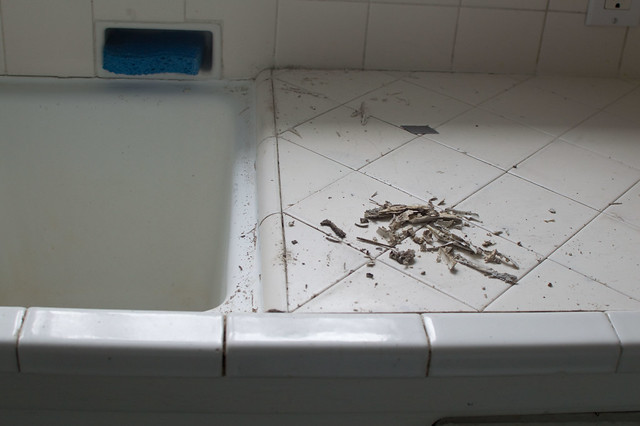 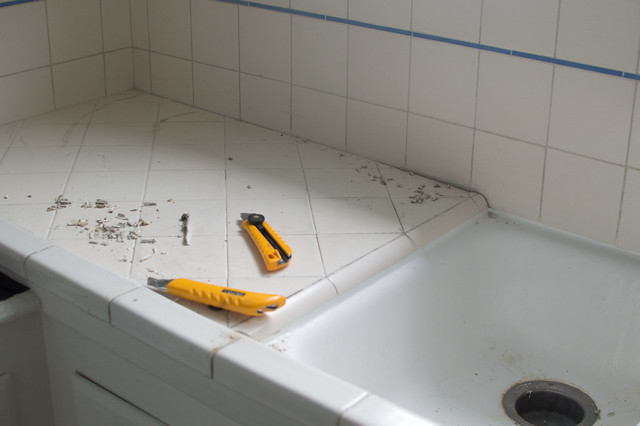 {un-grouting}
I went through an insane number of razor blades before we gave in and went to Home Depot. Not sure why we didn't go sooner because we were obviously going to have to buy grout anyways. I think I was hoping I could get away without the scraper. We'd watched this video which is really all you need to do to prepare.

A few hours later, we had a freshly grouted kitchen. I was so excited that I also filled in a few gaps in the bathroom later. 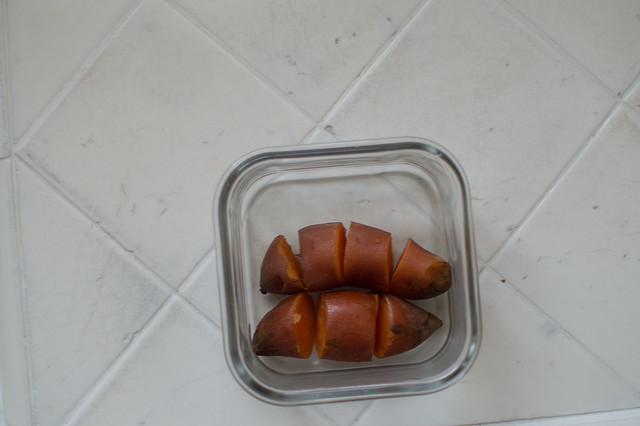 {sweet potato on new grout}
This is the randomest picture to show, but apparently I didn't bother to take an official after picture so instead you get this shot of tiny roasted sweet potatoes, aka the cheapest gluten-free dog treats you can find. It's how we give Circe her pills every day.

There's nothing we can do about the fact that the glazing on the old tile is getting patchy, but I can't tell you how relieved I am to see actual grout in there. I swear our whole kitchen seems brighter.

And yes, we rent. And I'm guessing they're going to re-do the kitchen after we leave anyways so this might seem sort of pointless. But our counters are small so this project took just a few hours of active time (plus not being able to use the sink for 36 hours) and cost about $35 in supplies, most of which we can re-use in the future. It was totally worth it and I'm only sorry I didn't do it months earlier.